UPPER DARBY, Pa. — The Suburban Realtors® Alliance (SRA) is calling on Upper Darby Township to fix its broken use and occupancy process. A survey of Realtors® who have recently done business in the township showed that 80% of them found the process difficult, and 53% said municipal staff did not return emails or phone calls.

“This is not a trivial matter, as it is creating serious hardship for sellers, buyers and the real estate professionals who are attempting to provide their services to current and future residents,” said Jamie Ridge, SRA president and CEO.

Upper Darby, like roughly half the municipalities in the Philadelphia suburbs, requires a use and occupancy inspection before allowing a property to change hands. The seller or buyer must request an inspection from the township, paying a $100 application fee. After the inspection, the township issues a resale permit allowing the transaction to move forward. 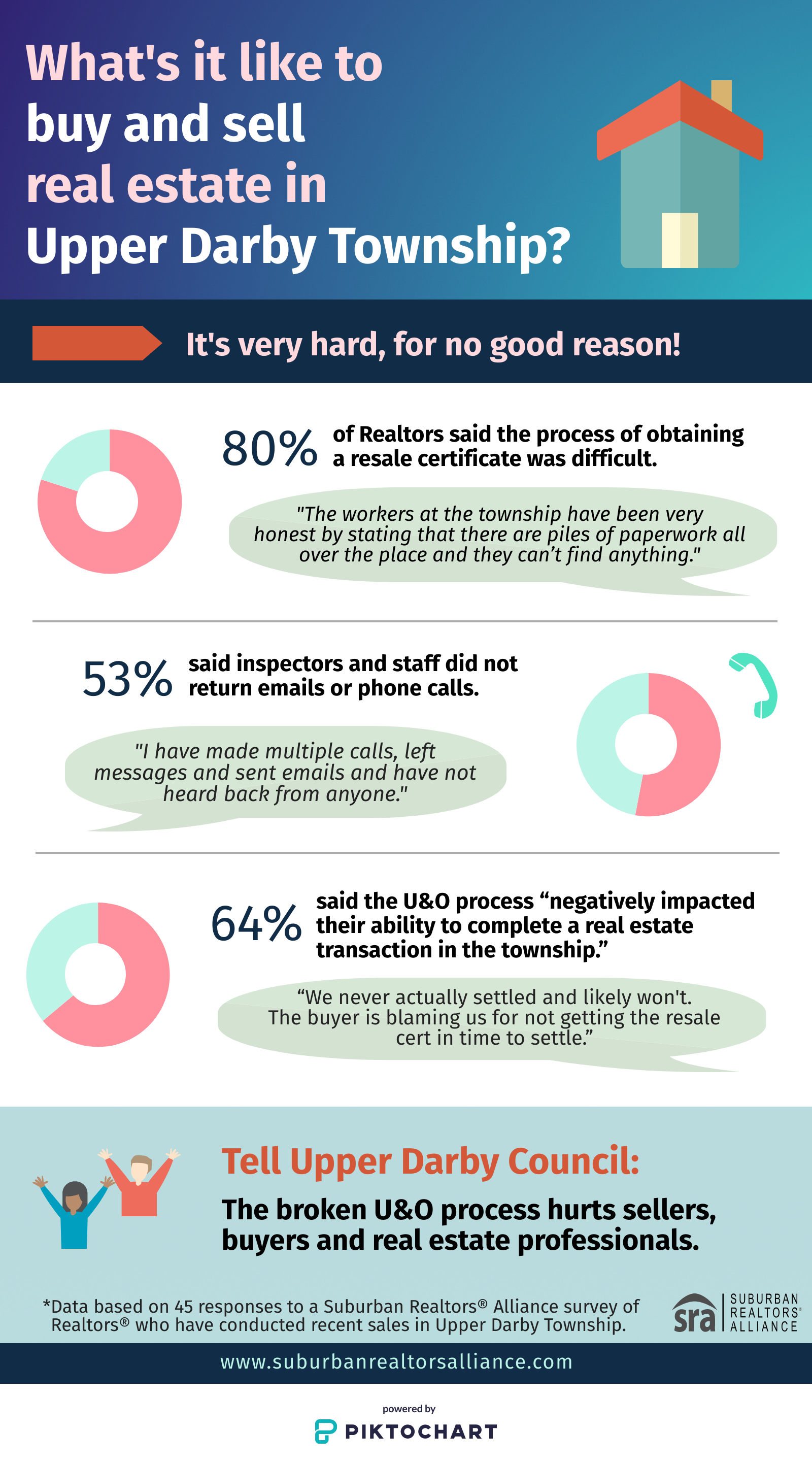 “Imagine trying to buy a home and you’ve done all the research, negotiated a price, secured a mortgage, hired a private home inspector, lined up insurance — and it’s all in jeopardy because the township won’t respond to your phone calls or emails,” Ridge said. “Deals are falling apart, and families are being left in limbo, unable to sell their home, or buy a home in Upper Darby. This is a level of incompetence that we have never seen in another municipality in southeastern Pennsylvania.”

After receiving frequent complaints and requests for assistance from Realtors® struggling to complete transactions in Upper Darby, the SRA in July created a survey, which drew 45 responses and revealed widespread frustration.

“Although we submitted everything required, the staff at Upper Darby stated that their computer systems were ‘down’ and they could not issue the certificate. This went on for several weeks, before and after our settlement. To this day we have not received the Certificate of Occupancy.”

“The workers at the township have been very honest by stating that there are piles of paperwork all over the place and they can’t find anything; Resubmitting the paperwork is the only way to proceed. What a mess.”

“I have made multiple calls, left messages and sent emails and have not heard back from anyone.”

On Aug. 25, Ridge sent an email to Mayor Barbarann Keffer, Township Council President Laura Wentz and Township Administrator Vince Rongione to share the survey results and discuss ways to improve the situation. None of them responded or acknowledged the message.

On Oct. 1, Ridge sent a similar email to members of township council. One council member, Donald Bonnett (1st District), responded that he had personally intervened on behalf of Realtors® and a property owner who were receiving no response from the township’s Department of Licenses and Inspections.

“We’re not seeing this level of dysfunction anywhere else in the Philadelphia suburbs, and there’s simply no explanation for it,” Ridge said. “I’m optimistic about working together with the township to make the situation better. But before that can happen, the leadership has to acknowledge there’s a problem they want to fix.”